Ironman Arizona landed on my schedule unexpectedly, but I am convinced it was meant to be.

Immediately following Ironman Mont Tremblant in August, I was determined to realize the hard-earned fitness that evaded me in Quebec. My target was Ironman Louisville in mid-October, which was slated to be the capstone to my busiest race season yet.

(Above) All smiles and "hey, I know that guy with the camera!" during the practice swim.

My master plan began unraveling in mid-September. On a standard morning run (one that Coach Flanny would describe as “nothing sexy”) I developed a sudden pain in my foot that felt eerily similar to an injury that had sidelined me for four weeks in January. This time it only cost me three and a half weeks, but that eliminated Louisville.

Around the same time, I was asked by my supervisor at WIC to attend a workshop in Phoenix in November. “Maybe there’s a race down there you can do!” she jokingly suggested. Wouldn’t you know it…the gig was November 14-16, which happened to be perfect, mid-week timing just prior to Ironman Arizona.

My build to the race was my most challenging yet. First my running setback, then the weather took an unusually blustery stance for much of the early fall. Many days were a struggle, both mentally and physically. Things were not clicking. It had crossed my mind that maybe, despite how “perfectly” everything aligned for Arizona, this wasn’t meant to be.

During one particularly difficult conversation with Flanny, he pointedly asked me, “Why this race? Why Arizona?”

I had been so focused on redemption after Mont Tremblant that it didn’t occur to me to pull the plug and call it a season. Things were finally starting to come around with my running (I think I’d done a grand total of 10 miles over 3 separate runs at this point) and I didn’t want to give up now that there was a little glimmer of hope.

Stammering a little bit to find my words, I finally concluded, “I don’t want to quit just because it’s hard.”

That statement ultimately became the theme of my day at IMAZ. (Well, that and “don’t f*%$ it up!” but more on that later…)

The final week leading into the race went as smooth as ever. Thanks to BikeFlights and the awesome staff at Moxie Multisport, race prep was a breeze. I had a killer homestay at a friend’s house and MFMG arrived just in time to absorb all the nervous energy that spazzes out of me the days leading up to a race. Sorry, honey.

The night before the race, I got several well-wishing, pumped up messages and texts from friends (thank you, all!) but my favorite was a conversation with my friend John:

The calm before the gun went off was probably the most serene I've felt before any race this season. I found feet straight away on the swim and for once they were the right feet!! I had the most comfortable, consistent swim I’ve ever had at this distance. About 2/3 of the way through I vowed that I’d fight harder to find the right feet from now on. Often I try to avoid the fight and opt for the more comfortable (but slower) solo swim, following my own line and trusting my own sighting. NO MORE! Those good feet are MINE!

I was really aiming to break an hour on the swim, so as I exited the water I kept trying to catch a glimpse of the race clock (without knocking over a fellow athlete or face-planting on the stairs). It wasn’t until checking the results later that I learned I’d set a new swim PR, coming within 33 seconds of my target sub-1:00 time. A great swim for me, and motivation to stay devoted in the pool. Shameless plug for Blueseventy and their continued support with functional, reliable and quality products that are a part of my daily training.

As the bike course took us out of town toward the Beeline Highway, it was clear we’d have some serious wind to contend with. Thankfully, Boise is blustery in the shoulder seasons and it felt just like spring riding back home. Many athletes lamented about the three-lap bike course and how tough it was to face that headwind again and again. I found this to be mentally helpful, though. My training had focused on several hour-long efforts at race pace, which is about the time it took me to get out to the turnaround with the headwind. This made it easy to wrap my mind around hunkering down and grinding when the wind was particularly forceful.

Despite the congestion on the course, I felt like my riding was smooth and consistent, though the third lap began to challenge me. I consciously reserved a little energy for the upcoming run since I was unsure how my legs would respond given the lighter volume in training.

Here’s where I had to really embody my declaration to Coach Flanny just a few weeks earlier: I don’t want to quit just because it’s hard.

I know you’re probably thinking, “Duh, Erin, Ironman is ALWAYS hard.” This is true. What I’m talking about is not when you visualize things getting tough, but when they actually do. During training sessions (ok, or even during lunch at work) I visualize how I will show tribulation who’s boss. I picture myself strong, overcoming, digging, unwavering in my tenacity to own the race no matter what I’m feeling in the moment.

But reality can be much different. There are times when all the visualization practice in the world seems to abandon you in the darkest of moments during the race. For me, this was the first half of the marathon. Man, it SUCKED. As I typically do, I kept mentally reassuring myself that my legs would come around if I could just gut it out for another mile. Like little, malicious trolls, my doubts would poke their way into my mind: “you’ll be walking soon” and “ain’t no way you’re chasing down girls today.”

(Above) Look closely and you'll see I have CLIF shot blocks squirreled away in my cheeks.

Around mile 14, something magical and unexpected happened: I started feeling good. Really good. Good enough to actually engage my mind in the race again, instead of just “running.” I chased down another female pro who’d passed me straight out of T2. I began hearing reports that I was in the top 10 and if I kept up the pace there was a chance of catching 9th. My, how quickly the vibe of my race had turned! I was exhilarated but also a little bewildered…people aren’t supposed to feel amazing during miles 14-22 in an Ironman marathon. But I did and it was more than welcomed. And then I remembered my friend John’s message to me from the night before.

As long as I was feeling spry, I was going to push it to the limit. Keep steady on nutrition/hydration, don't get so caught up that you skip an aid station and stay as relaxed and smooth as possible.

No need to describe the final four miles of the race; just suffice it to say that the mystical high I’d felt for the previous several miles came crashing down like the precarious cereal display in the grocery store when bumped by your cart. I made it, I didn’t f%$* it up, but I honestly don’t remember much in those closing miles.

I feel like I definitely closed my season on a high note. A solid race all around, a swim PR, just a couple minutes shy of an Ironman PR, and I rounded out the top 10.

Reflecting on my season, it is one that makes me proud. I am amazed by how much I continue to learn in this sport. There’s an assumption that just because you’re a pro you’ve got it all figured out. Pshaw! I’ve raced four full Ironman races in a calendar year in hopes of cracking the code. Each time I get a little closer, but also come away with lessons learned that I didn’t even realize I needed! It’s fun, and intend to keep going.

(Above) Boise-based coach Mark Sortino and his wife were on-hand for high fives and encouragement. Thank you!

All photos by my biggest fan, Matt Green 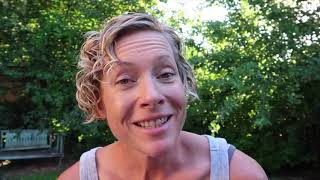